Listen to the Audio Version

Looking Beyond the Symptom to a Greater Societal Illness 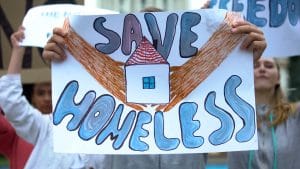 Executive Summary
Homelessness not only exists in our country and world today but has been a major destructive part of human psychology for centuries. It is a symptom of a pervasive problem that relates to attitudes and perceptions surrounding wealth and power. Society has taken the approach of treating the symptom but does not acknowledge or take into account the root of the illness — addiction to wealth and power.

An acknowledgment and shift in subconscious beliefs, attitudes, and perceptions act as the first steps in a solution to homelessness, but alone it is not enough to create lasting change. The awareness of prejudices and attitudes must be backed by a continuing dialogue around the access to education, health care, transportation, and other factors that either bolster or limit any one person’s opportunity to support themselves and others. As cities, counties, states, and a nation, we must acknowledge systemic barriers to how we respond to wealth while developing programs within a framework that addresses the needs and opportunities necessary for the whole person.

Background: Perceptions and Attitudes Toward the Poor

A look at the psychology of wealth and the views, attitudes, and actions as a reflection of a country’s (or individual’s) subconscious beliefs reveal homelessness as a symptom and greater indicator of an ongoing attitude, admiration, and even addiction to wealth and power by society as a whole.

Powerful nations throughout history have grappled with, or in some (most) cases ignored, symptoms of an addiction to the acquisition and growth of wealth. From ancient Rome to pre-industrial Europe through to today, the addiction influences relations between social classes, policy development, and power distribution.

Historians Walter Schiedle and Steven Friesen estimated that the top 1 percent of Romans controlled 16 percent of the country’s wealth. The wealth and power distribution contributed to the downfall of the Roman empire, yet the current ratios pale in comparison to those that exist today. To provide a modern comparison, empires, nations, and countries are given a Gini coefficient. In this system, a 0 indicates perfect equality and 1 indicates perfect inequality. Ancient Rome’s Gini coefficient fell between .42 and.44.[i] While numbers and percentages are only estimates based on incomplete records, those numbers allow comparison with past and modern nations.

The numbers show the ongoing disparity, but it is the psychology and attitudes behind the percentages and coefficients that point toward the roots of past and current attitudes and policies concerning the poor and homeless.

Within societies of the past and in our society today, wealthy individuals, groups, and countries dominantly view wealth and power as an entitlement and privilege earned largely independent from life circumstance. On a subconscious level, a person’s net worth is often equated with their self-worth, wherein the ego attaches wealth to both economic and social importance. This makes wealth and power the most socially accepted addiction throughout history.

In general, those who benefit from wealth do not necessarily view wealth distribution as a serious problem, rather, it’s perceived as the natural course of events. Wealth and power comes from the fruits of their labor, therefore, acquiring more of it is a result of effort.[v]

Consequently, there’s often a generalized view that poorer populations are:

There’s an illusion that intention, lack of effort, and inferiority dominantly cause homelessness, rather than a combination of systemic barriers and less fortunate circumstances. It eliminates variables like birth place, social connections, race, and lack of opportunity, education, medical care, and alternative places of living.

In short, the homeless and poor populations are perceived, consciously or subconsciously, as less than those who have, achieve, and hold greater wealth and power.

Many wealthy individuals are overly confident that if they were raised in a poor environment, they would be able to succeed and overcome the obstacles of poverty. Wealth can create a sense of overconfidence and overestimation of one’s own abilities and importance.[vi] They regularly underestimate the challenge that a lack of equal education and connections pose, along with a lack of understanding of the psychological, emotional, and physical suffering and, sometimes trauma, that’s more likely to happen in impoverished conditions. A grandiosity and denial pervades a large percentage of the wealthy populations that they could accomplish more than is viable given a reversal in circumstances and advantages.

Underprivileged groups suffer from a lack of opportunity to use their potential. Virtually every minority that does not have wealth and power needs government and philanthropic advocacy to overcome barriers to develop potential, talents, and skills. Poorer, in particular poor minority, communities face an unwarranted degree of skepticism and rationalization by those outside of the community.

Mohammad Yunus, the founder of microfinance and the Grameen Bank, the forerunner to Acumen and foundations that make loans to impoverished third world individuals and groups, revealed that poor people were better at paying debts than the wealthy when given an equal chance. Microfinance institutions created joint the liability lending program that creates a single loan payment for a group of people. It gives the lending institution an additional safety net and creates peer accountability as extra motivation for the person receiving the loan. These institutions also started the flexible loan repayment option that offers extended payment periods to cater to the unique challenges of poverty. Consequently, the financial institutions still profit and expand services but people have a longer time to build their business and payback loans.

At one point, Grameen Bank self reported that over a ten-year period only 1.6 percent of their loan payments were overdue. To be fair, adjusted, comparable calculations put that percentage at 7.8[vii]. Considering that the average default rate on a Small Business Administration (SBA) loan in the United States fluctuated from 11.5 to 17.4 percent hitting a high of 24.7 percent between 2000 and 2015, those numbers are impressive even after being adjusted for standard calculation[viii].

Access to the same resources and opportunities provides extra motivation that boosts effort, inspires discipline, and increases success, especially when the framework in which it is designed is meant to provide access to the poor. Wealth and power create a psychological distortion or illusion that poverty means inefficiency. In reality, poverty more typically means lack of opportunity.

Opening a Dialogue to Diagnose a Cause and Reduce the Symptoms

There is a lack of political discourse, education, conversation, and support for the poorer populations by those with power to create change. The greatest tragedy stems from a lack of access to equal education, medical care, and livable wages for those in the poorest conditions.

An ongoing message of, “We aren’t going to kill the incentive for the lower class to have giveaways,” comes from a distorted view by the mainstream wealthy strata of society, ignoring equal opportunity to survive and thrive, a major premise of our constitution, ideals, and the American dream. But, until there’s no longer a gross inequality of access to opportunity, the American dream is truly a myth.

One of the most obvious and least recognized features of dealing with the homelessness crisis is that every person in the homeless community is human with the same basic psychological and physical needs as those in the wealthiest circles, including the need for dignity, respect, and ability to use one’s skills and talents to support oneself. All people need care, support, encouragement, opportunity, and trust.

Conclusion: Identifying the Cause (Addiction to Wealth and Power) to Treat the Symptom (Homelessness)

The prejudicial perception described above combined with an addiction to wealth and power create a double-edged sword that, up until now, has buried the possibility for change in ‘a clear or unclear’ class system. A fallacy that equalizing opportunity for one group necessarily takes it from another permeates society. But, in this case, leveling potential prospects and choices sets society on a course for greater success and peace as a culture.

It is time for the discussion on how addiction to wealth and power runs roughshod over those with less of both. It effectually weakens the system that provided the wealthy with their status in the first place.

It is only when we discover the unconscious components that block us from seeing and implementing more practical, workable solutions that we can envision more specifically what is needed. As we as an American people acknowledge and face addiction to wealth as a hurdle to overcome, we can more successfully address social issues as important as homelessness.

Robert Strock is a teacher, psychotherapist, author, and humanitarian and has developed a unique approach to communication, contemplation, and inquiry. He promotes national and international conversations on healing, having been a featured speaker at the UN, contributed in global documentaries, and runs a thriving private practice for business, non-profit, entertainment industry and government leaders, as well as caregivers in a variety of fields.

Robert is an innovator in the field of psychology and is sought after for presentations, trainings, and consultation in corporate settings, non-profits, and with media audiences providing emotional and leadership guidance in times of global strife and uncertainty.

Open the Dialogue: The issues surrounding homelessness are many and complex. I invite all those who are interested in ending homelessness, addressing our relationship as a society to wealth, and other issues raised in this white paper to please reach out. Contact me at robertstrock.org.

[1] Belmi, P., et al, “The Social Advantage of Miscalibrated Individuals: The Relationship Between Social Class and Overconfidence and Its Implications for Class-Based Inequality,” Journal of Personality and Social Psychology: Interpersonal Relations and Group Processes: Vol. 118: No. 2 (2020): pp. 254-282 https://doi.apa.org/doiLanding?doi=10.1037%2Fpspi0000187